I have a PS3 game controller lying around, so I got the idea to add support for it to an old SDL game code. This code was still using SDL 1.2, which is now a thing of the past. So the first thing to do was quickly porting it over to SDL 2, a more modern game programming API. It even includes a GameController API, and because of that, programming support for game controllers with SDL is remarkably easy.

For initialisation, call SDL_Init() with extra flag SDL_INIT_GAMECONTROLLER. Additionally, you must open the game controller. The game controller is found by first querying the system for the number of connected joysticks.

This code is just an example. It assumes the first connected joystick is indeed the game controller that the player wants to use. This is of course ridiculous, and you should really loop over all joysticks and open as many connected devices as possible.

In them old days, supporting game controllers was … problematic. The thing is, every game controller is different and there is no common standard among manufacturers for numbering buttons and analog sticks. Even a simple D-pad is different between different controllers—think XBox360, PS3, PS4, but even PS2, Logitech, OUYA game controller? SDL 2 solves this incompatibility by mapping the raw device button ids to generic SDL enums. You do need to provide the correct mappings, these can be imported from a flat-file game controller database.

Finally, enable events so that SDL will generate events for us to collect in the main event loop.

When SDL game controller events are enabled, you will receive events of type SDL_CONTROLLERAXISMOTION in the event loop. You will find that SDL sends lots of these events, even when just holding the controller. This is just noise on the sensor, and the analog sticks are quite sensitive. Merely touching already registers movement. The ‘axis values’ are a signed 16-bit value, between -32768 and 32767. The SDL documentation says values between -3200 and 3200 are in the ‘dead zone’ where the sticks should be considered at rest.

The SDL_CONTROLLERAXISMOTION event boils down to this: 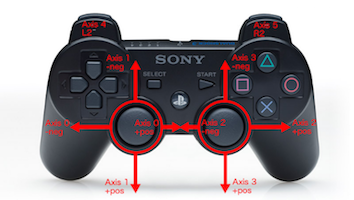 Analog triggers L2 and R2 register as axis 4 and 5, but they only report value 32767 when pressed, acting like digital buttons. This could be a driver issue (I’m on a Mac) or SDL not properly supporting the triggers. I’m not sure.

SDL generates SDL_CONTROLLERBUTTONDOWN and SDL_CONTROLLERBUTTONUP events. Inspect event.cbutton.button to see which button was pressed.
The button codes are hard to find in the documentation, but look in SDL_gamecontroller.h to find the enums. The API is modeled after an XBox type controller, for PlayStation the button ‘A’ is a cross, button ‘Y’ is a triangle, etcetera. The ‘guide’ button is the PS logo button.

I have a single player game so programmatically, I took the easy road and just map all buttons and stick movement to key presses, internally translating to a keyboard joystick. This works, but it’s not good enough for multiplayer games. It also loses the ability to properly react to stick acceleration; you might want to scale the axis values to have a proper difference between large and small stick movement.

Some tutorials suggest you ignore the ‘dead zone’, but this is wrong because when you fully ignore those events, you are unable to detect when someone suddenly lets go of the joystick. Instead, the dead zone should be mapped to zero movement. You can also keep track of sticks entering/leaving the dead zone, and react correspondingly.

The DualShock 3 controller has pressure sensitive buttons. SDL has no support for measuring the amount of pressure. Nor does it support the sixaxis motion sensor. SDL 2 can do rumble however via its Haptic API.

The cool thing about SDL is that it also ports to other platforms, maybe most notably the Steam OS. Since I’m on OS X I also had a quick look at how to do this joystick & game controller thing in pure Cocoa—not so easy at all. I’m with SDL 2 on this one.