Being a geeky programmer, I’ve grown accustomed to typing dvorak. After 15 years of qwerty my wrists and fingers started to hurt badly (again) and after I saw a new colleague typing dvorak on his (strange, but definately cool) TypeMatrix keyboard, I decided to give dvorak a try. Of course, I couldn’t type a single e-mail message in less than 15 minutes, so I gave up before my boss got angry. During the Christmas holidays I practiced dvorak using the online ABCD typing course, and I’ve since then fully switched to dvorak.

Rearranging the keys on a Macbook

The reason I came to write this blog entry is of course that I rearranged the keys on my Macbook to dvorak. You should be very careful when attempting to do this, as the keyboard is quite fragile. The best way to go about doing it, is to get a paperclip and put it under the top-left corner of the key. Be gentle! It will click, now slide down the left-hand side of the key and try popping the lower left corner of the key. Trying to rotate the key clockwise off (keep it flat down, but spin it around carefully) also helps. I realise now that I’m a left-hander, so keeping the Macbook upside down if you right-handed will help. The clips that hold the keycap in its place are on the left side of the key.
If the keycap won’t give, don’t force it. Take your time and take a deep breath every now and then.
You will find that in most cases, the keycap will come off cleanly. In some cases however, you might accidently rip off the inner tiny plastic layer mechanism-thingy as well. Do not despair. Hold the keycap between thumb and forefinger, and use the paperclip again to gently pry the piece out of the keycap. Now reinsert the inner piece again into the keyboard, and be sure to do it right (upside down won’t work OK). Put the right side in first and shove it under the metal clip. Now use your fingers to put the tiny “hinges” into place. If your fingers are too big for this, try fiddling with the paperclip and/or a tiny screwdriver (the kind you use for your glasses).
Now reinsert the keycaps by gently pushing them into place. Make sure you get the layout right the first time! You don’t want have to do the operation again.
On my Macbook, the tilde and the backslash are in a different place than expected, but this is because I have a Dutch keyboard. Click the image for a larger version.
All in all, I’m very happy with this layout, at least now I know where to find the letters! 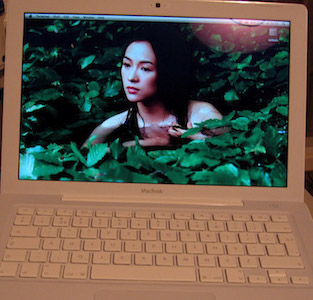 Dvorak can be learned in a couple of weeks if you practice a lot, but do not expect to type up to speed after only a few weeks. In my experience, it is like your brain remembers all the movements your fingers make for every word by itself. Especially in the beginning, your brain will know where to find the words and you will automatically mistype it. What I’m trying to point out is, studying the layout of the keyboard won’t help you; the brain seems to remember words and not characters. For a long time, I had trouble typing words that I had not yet used after switching to dvorak. As a consequence, it is hard getting your original typing speed back.
Count on as many as six months to get up a reasonably fast speed, and don’t be surprised if you’re still not any faster than you used to be (often due to still making too many typo’s to be blazing fast). This is one of the main reasons why critics say that dvorak isn’t any better at all. I say they should give it a try; you will find that when typing text, you are using one hand more than the other using a qwerty layout. With dvorak, your hands are often alternating in a surprisingly evenly balanced manner. This is due to the fact that in natural language, words that are made up from series of alternating characters, and the dvorak layout uses this fact to its advantage. A slight disadvantage is that a programming language is not much like a natural language. If you are fluent in C, for example, it takes some getting accustomed to programming in C on a dvorak keyboard as well.

Aside from the occasional application that doesn’t use the operating system’s keyboard layout (it is insane that this is even possible, see list below for my experiences with broken apps), you should also be mindful of what hardware you buy—unless you can type dvorak blindly on a qwerty keyboard (this is hard to learn). A lot of very standard qwerty keyboards cannot be easily converted to dvorak. Be sure to check the F and J keys, there are a lot of keyboards around that (for an unknown reason) have a different kind of socket underneath the F and J keys, and hence they cannot be rearranged.
The keys of the cool Microsoft Natural keyboard can not be rearranged.
Do not bother with keyboard overlays or writing the letters on the keys using a marker, the outcome is usually unsatisfying.
If you are totally hooked, consider getting an expensive special keyboard.

List of applications known not to work by my own personal experience: