Porting an OpenGL demo to iPhone

You may read this blog entry as “a beginners guide to OpenGL ES”. Like many others, I wanted to write a cute little app for the iPhone. Also, like many others, I know nothing about MacOS X programming (the Cocoa API), so I quickly found myself lost in the woods. I do have experience with SDL and OpenGL, however, so I decided to port the infamous “WHYz!” demo to iPhone, using Apple’s Xcode and iPhone simulator.

History of the WHYz! demo

The WHYz! demo is a story by itself. It is included here as background information and for the sake of story-telling. Skip this section if you are interested in the OpenGL ES code only.
Way back in them good old days, 1996, I wrote the first WHYz! demo on an 33 MHz 486 PC. It was meant as an electronic birthday card. During a dark night of coding, I rewrote the whole thing in 100% assembly code, hoping to squeeze a few extra frames out.
In 1997, I ported the C version to Linux using svgalib. I also played around with Qt around that time, but I don’t think I ever made a Qt port of the WHYz! demo.
In early 2006, I was first trying out SDL and made an SDL implementation of the WHYz! demo.
In 2007, I made a completely new rewrite in SDL/GL. This version is different from the original, but demonstrates the same kind of wave effect.
Now the wavy WHYz! demo comes to the iPhone with OpenGL ES.

The iPhone’s operating system closely resembles MacOS X. In MacOS X, applications are typically written in Objective-C. This is an object-oriented dialect of C. When you see Objective-C code for the first time in your life, your stomach will turn and your eyes won’t know where to look and you will feel dizzy. Remember this: Objective-C is much like C++, only with a different syntax. Readers of this blog may know I have already expressed my aversion of C++, well, Objective-C is even less prettier on the outside. On the other hand, the first impression is not everything. Objective-C seems to come with a very nice API, that is going to cost time and dedication to master. At this very moment, life is too short to spend valuable time on this, so lucky for us, it is possible to mix standard C with Objective-C, just like it is possible to write “C++” code in standard C, and only benefit from the handy “// comment” C++ syntax.
So, we will have Xcode generate the startup code for the main application for us, and call our good old standard C code from there. Cheating? No, just not rewriting working code in a dialect that I don’t speak.

As my existing code is all SDL/GL, I really need SDL for iPhone. How else would we setup the screen, handle input events from the operating system, play sound, and finally, render out OpenGL scene? As of yet, the answer is … you don’t. Maybe I didn’t look hard enough, but I did not find a SDL library for iPhone. It appears to be in development. For this demo, I managed to do without SDL, but things will be much harder when trying to port a full blown game.

For setting up the screen: Let Xcode generate an EAGLView.m for you. Insert your own init_gl() routine to setup the viewport, and reset the projection and model view matrices.
Input events: The demo doesn’t need input, but I’m sure Apple has some neat CoreInput or whatever framework for this.
Play sound: Not used in the demo, but they say you should use OpenAL, which sounds nice. OpenAL is portable and doesn’t look hard to use.
Render OpenGL scene: Insert your own draw_scene() code into the EAGLView drawView() method.

All done? NO, the best is yet to come. Hit the “Build and go” button in Xcode and you will get a ton of errors on OpenGL calls.

Hurdle #3: The limitations of OpenGL ES

OpenGL ES stands for “OpenGL, Embedded Systems”. Mobile devices are always relatively slow, simple, low-power computers. In the beginning, there would not even be a FPU. If your mobile device has no FPU and therefore only implements OpenGL ES 1.0, you are stuck with fixed point calculations. Lucky for us, modern mobile devices like the iPhone are capable of doing floating point calculations in hardware.
The graphics chips in mobile devices are also real simple compared their mean big brothers in gaming PCs. The OpenGL ES API has been slimmed down to mirror this.

Just to annoy developers, the great creators have altered a fundamental concept of OpenGL, only to force people into writing more efficient code. Shocking news: in OpenGL ES, there is no glBegin()/glEnd(). There is no glVertex(). There is no glTexCoord(). Argh!
There are only glDrawArrays() and glDrawElements().
(By the way, remember my OpenGL optimization lesson? Use glDrawArrays() to speed things up a little).

There is not even glFrustum() and glOrtho(), but their callings have been made more consistent with the rest of the API; call glFrustumf() and glOrthof().

There is no polygon mode, so no more cool debugging in wireframe (my absolute favourite polygon drawing mode). Well, you can do it, but not through glPolygonMode().

There are no display lists, use a subroutine as workaround.

There is no full set of color manipulation routines, only glColor4f().

Oh yeah, and you have to find the right include somewhere, too.

This leaves you with a rather big mess of cool OpenGL standard code, that just doesn’t work in OpenGL ES. I guess you could write a set of macros that converts existing code to ES, but I’d rather stay away from this headache. Nothing remains but to go through the code and do the tedious work of converting each and every block of OpenGL code to ES.

Converting the existing code is mostly looking for glBegin()s and putting all glVertex()s into a vertex array. Finally, call glDrawArrays(). I will give a 2D example for the sake of simplicity:

I was lucky that my code already used triangle strips …

If you use display lists, convert those to subroutines. You will lose the performance benefit that glCallLists() has. My guess is that mobile devices lack the GL “compiler” and cache memory that are needed for display lists.
Simply delete calls that set the polygon mode. If you need to draw lines … pass GL_LINES to glDrawArrays().
Finally, search your source for “glColor” and replace all by glColor4f().

When I finally got the code to compile, it still did not work. One of the problems was, the textures did not load. The thing is, on MacOS X, applications and data files are part of a bundle. If you want to load a texture, you have to access the bundle using the NSBundle class in the Cocoa library. Since my code is based on fopen(), I chose to cheat and not use the NSBundle class. At startup, I do a chdir(dirname(argv[0])) and find my texture files there. This is quite ugly, as it manipulates argv[0].

I had another caveat that was pretty obvious after I figured it out … I deleted the SDL resize_window() code from the source. This routine also (re)initialized OpenGL in the proper way … so I was trying to start out without having set the right coordinate system (oops).
When this was fixed, I could now happily enjoy watching the WHYz! demo in the iPhone simulator. (Yeah, it’s time to go buy a real iPhone …) 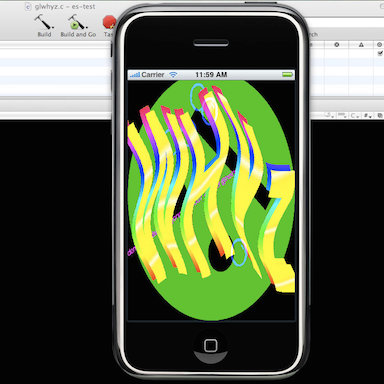