In 3D games, models consisting of thousands of vertices and polygons, are rendered to screen at least at 30 frames per second. For every frame, these vertices are transmitted from the memory to the GPU over the bus. For static models, this is a huge waste of time and bus bandwidth, because the vertices are the same for every frame. Why not cache the data in graphics memory and tell the GPU to get it there? This is what vertex buffer objects (VBOs) are all about.

In my 3D space game, I added the 3D model of an asteroid. The model has ~2700 vertices, which is not much at all (by modern standards), but I decided it should be a VBO and enable the code for even higher detailed models.
Never having used VBOs before, I took the safe route and implemented the asteroid first without any VBO code, and rewrote it later to use a VBO. This was a lot of extra work, but there were some lessons learned.
I found the following: 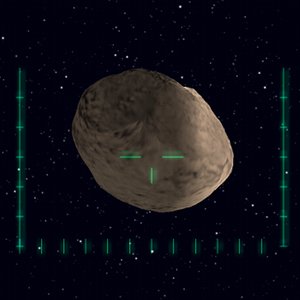 So, are VBOs the golden egg? Well, no. They are a great way of speeding up the rendering of high poly-count meshes. There are things that VBOs are simply not suited for. This has to do with both the limitations of OpenGL and what it is that you’re trying to achieve. For example, I tried loading the stars into a VBO. This turned out not to work very well, because in my code, stars are point sprites, and each star has a specific point size. Since you can not set the point size in a vertex array, it also makes no sense to use a VBO. I sorted the stars by size to draw them as a vertex array nevertheless, but this resulted in a low vertex count per call so it still makes no sense to use a VBO here.

I also noticed that 1D textures do not work in vertex arrays. Maybe I’m using them for the wrong purpose (texturing GL_LINEs) but considering that glBegin/glEnd is practically deprecated there may be a problem here.

Another problem I had was with face culling. This is not the VBOs fault, but I suspect that when you drape a triangle strip into a convex shape, it may show artifacts. Enabling depth testing did not help me here, but disabling face culling did.

Although VBOs are an add-on to vertex arrays, it seems like OpenGL always requires you to turn your code inside out when you want to change something. I stuck to static meshes for now and decided to abstract a VBO class from it, which wasn’t exactly easy either. Anyway, here is a link to a site that I used to implement VBOs: