Every once in a while I like to re-create an arcade classic game just for fun. Many arcade classics are simple enough to be built by a single person with a reasonable amount of spare time. The game of choice is Pac-Man.

When you think about it, Pac-Man is rather bizarre. You are a pill eating yellow mouth that is being chased through a maze by four ghosts. Their mission: KILL THE PAC-MAN! What makes the game fun is that you may temporarily turn the tables by swallowing down a power-pill, after which you can EAT the ghosts. The hunted becomes the hunter. Combined with cutesy graphics it becomes child’s play. This is not an easy game though, Pac-Man is notoriously difficult. Personally, I still can’t make it past level five.

Programming a Pac-Man clone isn’t particularly hard, but it does take effort to perfect it. There are lots of little tweaks and details that make the original so good. For example, the corners in the maze are rounded. This allows Pac-Man to cut corners and stay ahead of the ghosts that are in close pursuit.

Rather than using old-fashioned clunky bitmaps, I went for scalable vector graphics so it neatly scales to any screen resolution. Clearly Pac-Man is depicted as a yellow circle with a pizza slice missing. When you do it this way, you’ll notice that it doesn’t look as nice. The thing is, Pac-Man’s mouth is larger than a clean-cut pizza slice. The center of the circle is slightly off, allowing for a bigger mouth. For OpenGL this is not a problem; the Pac-Man character can be drawn as a triangle fan with circle coordinates, but the first vertex is not at the center of the circle. 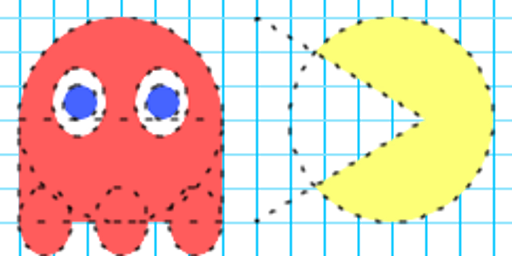 The ghosts are drawn with a rectangle and a number of circles and ellipses. Drawing ellipses is not easy, but since these are all perfectly symmetrical ellipses they can be drawn as stretched circles: scale the Y direction and draw a circle; the result is a symmetrical ellipse.

In the classic Pac-Man game the ghosts move from tile to tile, and so do they in my implementation. But since we’re using OpenGL anyway, it wouldn’t be a bad choice to use OpenGL’s world coordinates instead and move from corner to corner. This would theoretically allow for ultra-high speeds. Come to think of it, maybe it would be nice if the ghosts would accelerate and hit the brakes before taking a corner. This would subtly change the game, however.

In terms of AI, I always thought that the ghosts moved in predetermined patterns, which is not true. Nor do they turn at random. Each ghost has its own behavioural rules. You can read all about it at the Pac-Man Dossier. This page describes the game in enough detail to allow you to create your very own Pac-Man clone.